The History of Metzger Wickersham 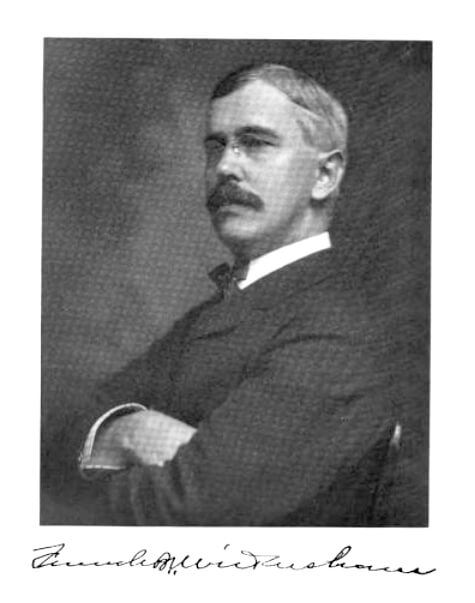 “As a practitioner of his profession, he enjoyed a large and varied clientele and was always astute to protect the interests of his clients… He was particularly helpful to young lawyers and frequently aided them with many useful suggestions.” (Memorial and Resolution of Honorable Frank B. Wickersham, by the Dauphin County Bar Association)

Born April 7, 1863, Frank Borbridge Wickersham was one of 12 children. He obtained his preliminary education in the public schools and taught school for several years before graduating from the Cumberland Valley State Normal School (now known as Shippensburg University) in 1884. The following year, Mr. Wickersham registered as a law student under Senator McCarrell. He was admitted to the Dauphin County bar on June 9, 1888 and soon after began the law practice that is known today as Metzger Wickersham.

During his career, Mr. Wickersham served as solicitor for the borough of Steelton, among other local leadership positions. He was highly esteemed by his colleagues and was elected as a member of the Pennsylvania state legislature for two terms. He also served as Assistant District Attorney and as president of the Dauphin County Bar Association. In 1920, Frank B. Wickersham left his law practice to become a judge. He served twenty-two years as a judge until he retired on January 5, 1942.

Honorable Frank B. Wickersham passed away in Harrisburg on February 20, 1945, at which time he was remembered by his colleagues at the Dauphin County Bar as “one of the oldest and most respected members.”

Sources: “History of Dauphin County” / “Memorial and Resolution of Honorable Frank B. Wickersham, by the Dauphin County Bar Association” 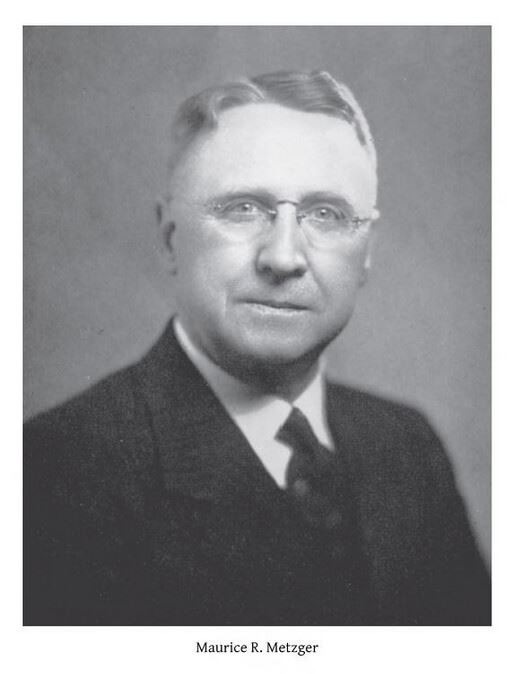 Also a former school teacher, Maurice R. Metzger joined Frank B. Wickersham in the practice of law to form the partnership of Wickersham & Metzger in the early 1900s.

Maurice Rutt Metzger was born in Londonderry Township on September 12, 1884 and was raised with a farming background. His early years attending a one-room school developed his characteristics of hard work, patience and persistence. Upon graduating as valedictorian from Middletown High School in 1902, Mr. Metzger taught school for several years. He then attended Lebanon Valley College from which he graduated in 1907. Following Lebanon Valley College, Mr. Metzger attended the University of Pennsylvania Law School and was subsequently admitted to practice law.

Maurice Metzger practiced law for 55 years, and although his main office was always in Harrisburg, he also met with clients in the evenings and on Saturdays at his home in Middletown.

Besides practicing law, Mr. Metzger was elected to serve for two terms as a Republican representative of Dauphin County in the Pennsylvania state legislature. He also served as President of the Dauphin County Bar Association and was known as a “powerful factor in the mercantile and industrial enterprises of Harrisburg.”

“Harrisburg and Dauphin County: a Sketch of the History for the Past Twenty-five Years, 1900-1925, Volume 2″ by George Patterson Donehoo

Mr. Metzger’s “courtesy to both clients and fellow lawyers and his willingness to help younger lawyers as preceptor and adviser is almost legendary… He was noted for his calmness, patience and understanding… He was a student of the law and enjoyed many hours in the rocking chair at his office in Harrisburg reading law and preparing his court cases. His reputation for hard work, fairness and humanity followed him throughout the years of his long and active practice… He is remembered alike by his former clients and fellow lawyers as the epitome of the general practitioner, who practiced law and treated his fellow men with kindness, ability and fairness.” (Memorial and Resolution of Maurice R. Metzger, by the Dauphin County Bar Association).

Sources: “Memorial and Resolution of Maurice R. Metzger, by the Dauphin County Bar Association” / “Reminiscences of an Octogenarian,” by Bruce M. Metzger 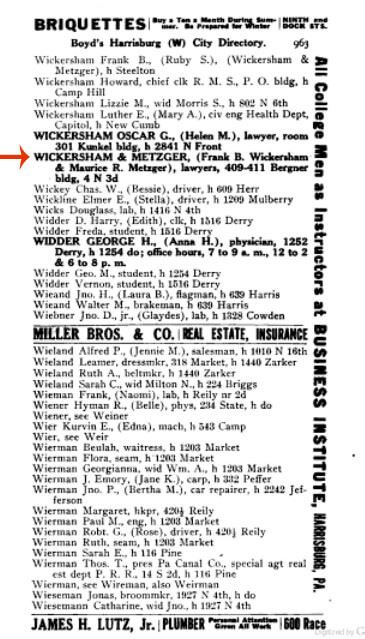 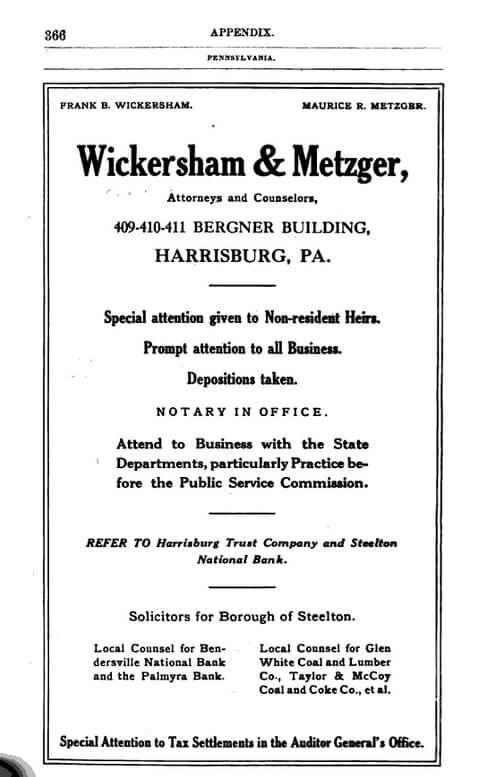 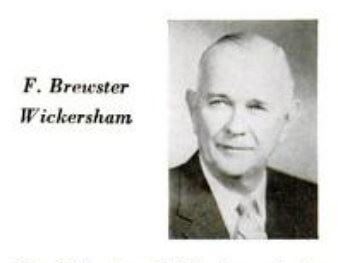 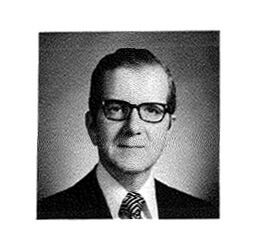